The Atlanta Hawks, coach Lloyd Pierce and State Farm, continued their commitment to return to recreation centers and bring community service projects that would benefit the community by hosting the first annual Community Spades Tournament on Friday at the William Walker Recreation Center.

The tournament consisted of more than 60 registered teams. Hawks legend Dominique Wilkins and Hawks point guard Brandon Goodwin was among the participants. “I know we are not going to get out of losing the first round. That’s all I know.”  said Goodwin. “We are going to get out of the first round and try to get a win. You never know so we will see.”

Hawks guard John Collins was also on site showing his support by signing autographs and engaging the youth, who was participating in a UNO tournament that was taken  place simultaneously inside of the State Farm Good Neighbor Club (GNC), at the recreation center. 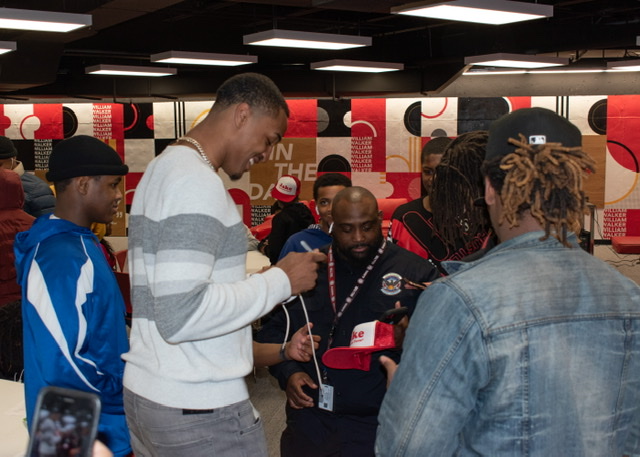 “Coming out to support coach today, coach does a lot of community things in Atlanta. He’s made an effort to do such things. It’s important for me to support him. He supported me and my efforts so I do so as well.” said Collins.

Hawks CEO Steve Koonin jokingly commented on Coach Pierce statement, “If you cant play Spades you shouldn’t be here.” I think that was inhospitable of him.” said Koonin. “I hope we open up with them. Nothing can be more fun to send home the host early.”

All participants entered into a raffle to win Hawks gear, Hawks Shop gift cards, a signed player basketball and more. The tournament winners received a trophy, courtside tickets to an upcoming Hawks game, a customized jersey, and a host of other prizes.

“I am apart of the community. Atlanta is my home. I represent the Hawks from the professional and basketball standpoint, but I want to be just as much apart of the community as anybody else. So to be down here again it’s not a who’s who event. We are all in this. We are going to have some fun tonight. I like being apart of the community because the same people that come out and support us really enjoy what we do and appreciate what we do. We need to show that love back anyway we can.” said Pierce.