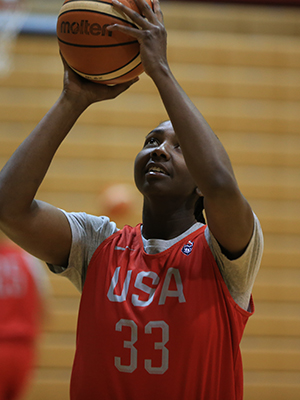 COLUMBIA, South Carolina (Sept. 5, 2018) – Following its three-day camp in Columbia, South Carolina, which culminated with an entertaining intrasquad exhibition game on Sept. 5, 14 athletes will continue on to USA Basketball’s next training camp in the hopes of claiming a spot on the 2018 USA World Cup Team. Additionally, the roster further will be bolstered by the addition of Elizabeth Williams, who helped the Atlanta Dream advance to the 2018 WNBA semifinals.

The U.S. will train Sept. 7 (10:30 a.m. EDT) at the New York Knicks practice facility in Tarrytown, New York, before taking on Canada in an exhibition contest on Sept. 8 (7 p.m. EDT) at Webster Bank Arena in Bridgeport, Connecticut.

Two-time defending World Cup gold medalists, the USA is preparing for the 2018 FIBA World Cup, which will be held Sept. 22-30 in Tenerife, Spain.