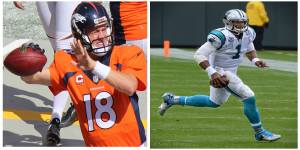 The underdog Denver Broncos, led by Von Miller and that hellacious pass rush carries Peyton Manning and the offense as they defeat MVP Cam Newton and the Carolina Panthers 24-10. To see how it all went down, check out the overview below:

1st quarter: Both teams come out conservatively on offense and aggressive on defense. The Broncos defense dominates much of the first quarter. After a questionable incomplete pass from Newton (call that stood after review), Newton is strip-sacked by LB Von Miller, which leads to a Broncos TD. The Panthers find themselves trailing for the first time in the playoffs 10-0.

2nd quarter: The Panthers’ offense finally comes to life. Newton mainly uses his legs to move the ball down the field. With the help of a personal foul penalty by CB Aqib Talib, the Panthers punch the ball into the endzone with a spectacular dive by RB Jonathan Stewart. After each team trades some more three and outs, Broncos WR Jordan Norwood returns a punt for 61 yards (the longest in Super Bowl history). However, even with good field position, the Broncos only come away with a field goal. A little later in the quarter, FB Mike Tolbert, who had recovered his own fumble in the first quarter, fumbles yet again and cannot recover the ball this time. Two plays later, RB C.J. Anderson breaks loose for a 34-yard run. The defense responded with a one-handed interception by DE Kony Ealy. Carolina’s slow final drive of the half ends with a Demarcus Ware sack. The Broncos lead 13-7.

3rd quarter: The Panthers strike right away with a 45-yard reception by WR Ted Ginn Jr. After another first-down pickup by Ginn Jr., the offense stalls and the Panthers have to settle for a field goal, which was no good as it hit the post. The Broncos seize their chance and get another three points on their next drive. Newton and company once again strike with a 42-yard pass to WR Philly Brown but once again, they turn the ball over when Newton overthrows a pass intended for Brown and was picked off by S T.J. Ward. The Broncos’ defense suffocates Newton and gets another sack. The Broncos lead 16-7.

4th quarter: The Broncos appear to be in cruise control until Manning is stripped and turns the ball over. The Panthers only manage to score a field goal off the turnover. After a quick three and out by the Broncos’ offense, the momentum seems to be going in the Panthers’ favor but Newton and the offense are stifled again. The Broncos’ plan is to just kill the clock, but there is still way too much time for the MVP to drive his team down the field. That isn’t a problem for the beast Von Miller as he creates another turnover. The Broncos were looking to kill some more clock, but star CB Josh Norman commits a crucial holding penalty. Anderson punches the ball into the endzone, which seals the victory for Manning and the Broncos.

The story of the entire game was missed opportunities for both teams, which kept the score from being higher than what it was. With just about the entire nation outside of Denver favoring the Panthers, The Broncos came out and played the game of their lives against the MVP and the 1# offense in the NFL. Similar to how Tom Brady was beaten up in the AFC Championship game, Cam Newton wasn’t dancing much as he probably wanted to as he was beaten up the same way – getting sacked seven times and hit many more times. While it was shocking to see the Panthers get shut down offensively, the Broncos have been doing this to just about everybody this season. This game was no exception as the formula remained the same: the defense will be the reason why the team wins, not the offense. Still, Manning deserves his credit. Just months ago, we (including me) thought that Manning played his last down in the game that he was benched. I’m glad to see him walk out on a high note (if he is going to retire). The game will remember him for his contributions and will remember this run for years to come.