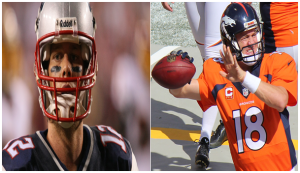 The New England Patriots travel to Mile High city to take on the Denver Broncos. This will be the 17th matchup between Tom Brady and Peyton Manning (Brady leads the series 11-5) and the fifth time that the two quarterbacks have played each other for a trip to the Super Bowl. While Brady has dominated the matchups against Manning, Brady has struggled in his career playing against the Broncos in Denver. His record there is 2-6 all time. In fact, the Broncos are the only team with a winning record (7-6) against Brady all-time. Every other team Brady has faced, he either has a .500 or better winning percentage. Although both quarterbacks are similar in age, they have looked and played much differently this season.

Tom Brady, Bill Belichick, and the New England Patriots have dominated the AFC and the NFL for a very long time. This season was yet another example of that. The Patriots finished the season 12-4, dealing with a slew of injuries along the way to a variety of key positions including, RB, WR, and OL. Brady finished the season throwing for just under 5000 yards, 36 TDs, and only 7 INTs – numbers that would have guaranteed him his 3rd MVP award if not for those QBs in Carolina and Arizona. For Brady, this will be his 10th Conference Championship game appearance – an NFL record – with Belichick. If the Patriots go on to the Super Bowl, it would be Brady’s seventh Super Bowl appearance; the most by any quarterback ever. Also, if the Patriots manage to win the Super Bowl, it would give Brady five Super Bowl victories, which is also the most by any quarterback ever and would probably give him the nod as the greatest quarterback ever ahead of Joe Montana. Brady said he could see himself play in the NFL for another 10 years and at age 38; it is hard to question him considering his performance this season and his general style of play (short-passing, methodical). Brady looks 38 years young while his rival on the other side looks like a much older man at 39.

Manning, widely regarded as the greatest regular season quarterback, finished the regular season throwing for less than 2500 yards, 9 TDs and 17 INTs, completing under 60% of his passes with a QBR of 45.0. In his final start of the regular season against the Kansas City Chiefs, Manning was benched after throwing 4 INTs. As of late, the Broncos have needed to rely on Manning again, bringing him off the bench in a 27-20 win against the San Diego Chargers to clinch the #1 seed in the AFC and starting him in the 23-16 win against the Pittsburgh Steelers in the AFC Divisional Round. In all likelihood, this playoff run will be Manning’s last. Capturing the Super Bowl this season would tie him with his brother Eli Manning for Super Bowl victories (2), would probably force the football world to view him as a postseason winner, and would finally let Manning ride off into the sunset.

Prediction: With Brady’s key targets (Rob Gronkowski and Julian Edelman) looking somewhat healthier now as opposed to the two teams’ first meeting this season, it is hard to go against the Patriots in this matchup. However, the Patriots have listed 21 players on the injury report including Gronk and Edelman. The Broncos only shot of defeating the Patriots is to get after Tom Brady, which has always been the blueprint for beating Brady and is something the Broncos accomplished in their last meeting by sacking Brady three times. They also need Manning to just show up like he did last week against the Steelers. There is no way that Manning outduels Brady, but if he can give his #1 defense some help by leading a few key TD-scoring drives, the Broncos can win in a low-scoring affair. I actually see Denver pulling off the upset somewhere along the lines of 23-20. 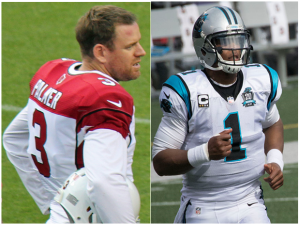 The Arizona Cardinals travel to Charlotte to take on the Carolina Panthers. This will be the first time in NFL history that a championship game will feature two Heisman-winning QBs and the first time that Carson Palmer and Cam Newton have ever played in a championship game. The Panthers have had the Cardinals’ number as of late, winning three of their last five meetings including last year’s NFC Wild Card matchup 27-16, but the Panthers have never faced them with Carson Palmer starting at QB. The Cardinals finished the season with the #2 offense in the league (1 spot under the Panthers). Both teams are looking to advance to their 2nd Super Bowl appearance in their franchises history. Considering where both teams were last season, no one at the start of this season could have seen a matchup like this occurring. Palmer had recovered from and ACL injury, the best receiver on the team was an aging Larry Fitzgerald, and although Palmer gave the Cardinals a much better chance of winning than any other QB in franchise history since Kurt Warner, the Seattle Seahawks were still viewed as a top team in the NFL and were highly favored to win the Super Bowl this season. Last week, the Cardinals high-powered offense looked shaky in their win against the Green Bay Packers. Palmer had thrown multiple momentum-crushing interceptions in the endzone and the defense gave up a Hail Mary TD pass at the end of regulation, which forced the game into an overtime that the Packers had no business being in. Even so, the manner in which the Cardinals won that game has to give them motivation going into this championship game against the Panthers.

On the other side, the Carolina Panthers started their season with a bunch of question marks and not enough answers. Kelvin Benjamin, Newton’s #1 target, was gone for the year with an ACL injury, leaving veteran TE Greg Olsen as the best receiving option available on the team. The team was predicted to struggle this season but that just has not been the case. Even while winning 15 games in a row and capturing the #1 seed in the NFC, the Panthers were still predicted to fall to those very same Seahawks that stomped the Cardinals 36-6 in the final game of the regular season and beat Newton and the Panthers three times in a row. Proving the football world wrong once again, the Panthers put up 31 points in the first half and would hold off the Seahawks near second-half comeback winning the game 31-24. This win showed that the Panthers were for real and made them a favorite to get to the Super Bowl.

Prediction: In a matchup between the #1 and #2 offenses in the league, it is easy to expect this game to be high scoring. However, the weather has to be kept in mind as a winter storm has now gripped the east coast. While neither team is a stranger to cold weather, weather will always be a factor in any game and so I don’t personally see the game being too high scoring. While I do think the Cardinals are the better team and that they could beat the Panthers if they were the ones playing at home or at least on a neutral field, Carolina has been riding an emotional high all season long. I see Carolina playing very well at home where they have not lost even once this season. Unless Palmer has a tremendous game, I don’t see them overcoming the Panthers. Palmer cannot play shaky like he did against the Packers or it might be a long day for the Cardinals. I see the Panthers winning somewhere along the lines of 28-25.