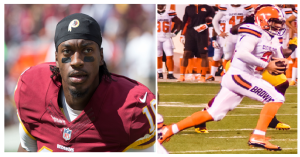 When the Dallas Cowboys aren’t making any headlines with their performance on the field, they somehow manage to always stay relevant simply because the owner, president, and general manager (and probably unofficial head coach) Jerry Jones loves to talk and be heard.

On Tuesday, Jones was asked if he would be willing to bring a young but risky quarterback into the franchise on 105.3 The Fan in Dallas. His response essentially was: Yes, as long as he has great upside.

With the blunder of a QB carousel that the Cowboys went through after aging franchise QB Tony Romo went down not once but twice this season, Jones obviously wants to make sure he doesn’t have to witness another disaster like this ever again or at least not anytime soon. With that being said, popular names such as Robert Griffin III and Johnny Manziel have been thrown out as possible additions to the team.

RGIII and Manziel have both expressed interest in playing for the Cowboys and Jones has commented on many occasions that he is a fan of both players. Considering the idea that the Washington Redskins have clearly moved on from RGIII as Kirk “You Like That?!” Cousins has proven to be a better quarterback and the idea that the Cleveland Browns have just about reached their breaking point with Johnny Football after his latest ridiculous incident, Jones must either be feeling really giddy or nerve-wracked as he will likely have his pick of the popular litter. Since Romo is nearing the end of his career, whomever Jones picks may very well be the successor to Romo. I am here to break down the potential upsides and setbacks Jones and the Cowboys may have choosing either QB:

It seems like such a long time ago since RGIII, probably one of the most dangerous rookie QBs to ever play in the NFL, had taken the league by storm. Being a QB with track speed, he was a nightmare matchup for any team, especially since the read-option was still a fairly new concept to the NFL. Had he not suffered that knee injury against the Baltimore Ravens in 2012, he very well could have been a Super Bowl champion that year. Fast-forward to today, RGIII is now just Robert Griffin and is simply another guy playing quarterback in the game.

There is no doubt that Jones was pleased with his team’s performance last season. Jones appeared to have proven once again that he knew more about football than everybody else with his drafting of G Zach Martin, who heavily contributed to Romo and RB DeMarco Murray having the best seasons of their careers. While Martin may have been the Cowboys’ top priority and has turned out to be one of the better guards in the game, further down that same draft board in that draft was Manziel. If Jones couldn’t get or didn’t want Martin, who’s to say that he wouldn’t have drafted Manziel? Now he has a chance to get Manziel without having to waste a draft pick on him. Together, they could finally “wreck the league” (a phrase that seems to have a double meaning at this point considering Manziel’s antics off the field), as Jones would have envisioned.

I’ve decided to name only one setback, but it’s probably the biggest one with Manziel.

Overall, both QBs are big risks for Jones to take on. One is a big risk to put on the field while the other one is a risk off the field. If I were Jerry Jones, I think Robert Griffin III would be slightly less of a risk to take. At worst, Griffin would be riding the bench while collecting easy paychecks for only 1 year and then he could get rid of him. With Johnny however, he will be collecting paychecks while riding the bench and making the Cowboys relevant for the all the wrong reasons. Either way, Jones will get what he pays for. Theoretically, wouldn’t you rather pay for the damaged premium good (Griffin) instead of the damaged (and I’m not talking about physically) cheap good?