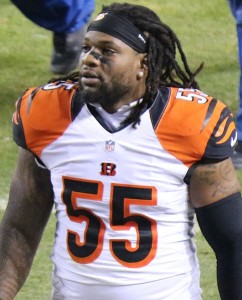 On Monday night, The NFL announced that Cincinnati Bengals LB Vontaze Burfict would be suspended for three games of the 2016 season for repeated violations of safety-related playing rules. Burfict will appeal the suspension.

The suspension comes as a result of his actions during Saturday’s AFC wild card game against the Pittsburgh Steelers. Late in the fourth quarter of Saturday’s loss, Burfict was flagged for hitting WR Antonio Brown, who failed to catch a pass from QB Ben Roethlisberger, in the head and appearing to knock him unconscious. Brown remains in the NFL’s concussion protocol. This flag combined with another personal-foul penalty from CB Adam “Pacman” Jones led to the Steelers’ game-winning field goal.

When the two teams met just weeks earlier, Burfict was fined for a hit towards Roethlisberger’s ankles. If the three-game suspension is upheld, Burfict will lose $502,941 of his base salary for the upcoming season and will have totaled $647,395 in fines since before the start of the 2014 season.

Did Marvin Lewis Deserve to Keep His Job?

Sometime after the game, the Bengals announced that they weren’t going to fire head coach Marvin Lewis essentially because they wanted to keep stability. Lewis, who holds the most wins in franchise history and is coming off of a franchise record-tying 12-4 record and yet another AFC North Division Championship, now holds a playoff record of 0-7 in 12 seasons. While Lewis is the probably the most accomplished coach in team history, did he deserve to keep his job? My answer: Yes.

While it is embarrassing that Lewis still doesn’t have even one postseason victory with all of the teams that he has had over the years, I feel it is unfair to use this game as an excuse to fire him. Lewis put his team in position to win as best he could, having to work with rookie backup quarterback AJ McCarron, who obviously had no playoff experience in the NFL. The Bengals overcame a 15-point deficit late in the third quarter and the game appeared to be over when Burfict intercepted a pass from QB Landry Jones. If Lewis had been fired after that game, it would not have been because of his coaching performance but for the actions of Burfict and Jones at the end of the game instead.

Yes, emotions were running high because it was the playoffs and these two teams have a lot of bad blood between them but when do we acknowledge that players need to be held to a very high standard? Burfict and Jones, two of the best players on the team, have to know to not let their emotions overtake them, especially at the end of a playoff game. Burfict had no business trying to punish Brown on that play. He could have just wrapped him up and forced Pittsburgh to actually beat them. And who told Pacman Jones that he had to be an enforcer when non-players (not including refs) entered the field? While these actions do point to a lack of discipline enabled by Lewis, how come no other player let his emotions get in the way of winning the game? I’m sure the other 50- something players on the roster were enraged by the hit on RB Giovani Bernard yet no one else felt the need to retaliate because of the stakes. Firing Lewis would’ve shown how unfair it is to be a coach in professional sports.

Being a head coach is a lot like being a parent, which is also a really difficult job. The only difference is that parenting doesn’t offer millions of dollars. Society dictates that a parent has to be held responsible for any number of children and the way they all turn out. Theoretically, I could have four children and raise three of them to be outstanding, productive members of society, but if the fourth turns out to be a bad apple, I would still be looked upon as a bad parent. Head coaches in the NFL have to account for a 53-man roster, a coaching staff, and their actual children if they have any. When two out of all of those people that Lewis has to account for act up, should he really be fired? While it seems that I am giving Lewis a pass for not winning yet another playoff game, I think this is a deserving pass considering the circumstances and considering how close the Bengals came to ending their playoff-win drought.