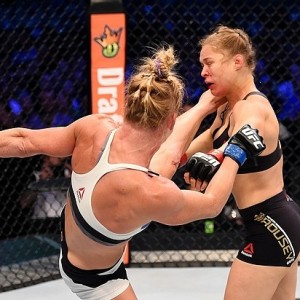 Recently, UFC President Dana White announced a rematch between current UFC women’s Bantamweight Champion Holly Holm (10-0 MMA, 3-0 UFC) and previously undefeated megastar Ronda Rousey (12-1 MMA, 6-1 UFC). The fight is scheduled to take place at UFC 200 on July 9 in Las Vegas. The announcement comes weeks after Rousey’s devastating loss via KO to Holm. Lenny Fresquez, Holm’s manager, voiced his concerns about the announcement claiming that Holm wanted to get back in the cage as soon as February to defend her title against Miesha Tate and the July 9 date is too soon for Rousey. Rousey, who is still recovering from the fight, has expressed interest in the fight. While everyone including yours truly wants to see the rematch, one has to question whether or not Rousey even deserves a rematch. For me, that answer is a big, fat NO because it is unfair to all of the fighters involved. Let me explain:

Why it is Unfair to Ronda Rousey

You see that picture at the top of this post? It has been said “a picture is worth 1000 words,” and that picture probably tells twice as much at the very least. While it is an incredible shot to cap the match and event, the story that is being glossed over is the extent of Rousey’s injuries.

Rousey was hospitalized immediately after the fight. She ended up losing some teeth and had to have plastic surgery performed on her lip. Hmm, I wonder what caused that? She was suspended from doing any type of training for 45 days. Oh, and by the way, she can’t even eat an apple right now. While July 9 is a long way from now, a good chunk of that time will be spent in recovery for Rousey. Not to be funny, but seeing the way she lost, Rousey needs as much time as she can get to work on her striking game. Unless Holm completely forgets how to sprawl or Rousey starts getting really creative with her takedowns, this rematch will probably play out in a similar fashion to the first one. If Rousey doesn’t want to get embarrassed again, she will need her training. She isn’t going to roll out of bed one morning and figure out how to box with a former boxing champion. While she may have been knocking out her opponents as of late, we now know what happens when she has to go up against a world-class striker like Holm. You just know that somewhere out there, Floyd Mayweather Jr. is thinking to himself each night: “If Ronda looks like that against Holm, what does she think will happen if she steps in the ring with me?” Too bad Floyd hasn’t legitimately knocked someone out in nearly ten years (the Victor Ortiz KO doesn’t count Floyd).

I also think this fight is too soon because it is the very next fight for Rousey. Usually when fighters return from long layoffs (especially coming off of crushing losses), they take tune-up fights. It is common and probably necessary for great fighters to take tune-up fights because it gets those fighters back into the swing of things and gives them their confidence back. If Rousey fought anyone else and easily won, everyone including Rousey would have thought that she was back. How is a fighter supposed to have confidence going up against the same opponent that just put him/her in the hospital and shattered his/her confidence? No one knows what to expect from Rousey going into this fight, which would have been an advantage if Rousey were still an unknown, but she isn’t. We all know what her go-to strategy is and when that doesn’t work, what is she going to do? It’s like watching a movie on TV and expecting the network showing the movie to show a secret ending that wasn’t shown previously in the theaters or on DVD.

Why it is Unfair to Holly Holm

Although Holm was a decorated fighter (as a boxer) way before she got in the octagon to slay the giant Rousey, her KO win over Rousey marked her third fight ever in the UFC, meaning she is still a relatively inexperienced UFC fighter, let alone a UFC champion. For Holm, getting back into the octagon as soon as possible is the best thing she could do right now. The long layoff could make her rusty going into this fight. Considering Rousey’s injuries and Holm’s potential for rust, why wouldn’t Dana White want to schedule this fight when both fighters are at their best? Come July 9, that may not be the case for one of them if not the both of them.

Also, getting Holm back in the octagon way before July would have kept her fresh and got her in the mindset of preparing for what it takes to remain a champion. Any champion will tell you that winning a championship is only the start of the journey, but remaining on top is where the real journey takes place. By the time Holm fights Rousey, she might need to be reminded that she owns a UFC belt and would have to put it on the line. Holm shouldn’t have to wait on Rousey to get prepared to fight her again. Instead, it should be the other way around. If the fight were much closer and Holm had won by a split-decision, I could understand a rematch occurring as soon as possible, but not after a complete thrashing. Rousey should have to work like everyone else to get her chance at getting her belt back. Instead, she is undeservingly being handed one.

Why it is Unfair to Tate & Other Potential Challengers

As you are probably aware by now, Miesha Tate is indeed the third wheel in this situation when she shouldn’t be. Since her second loss to Rousey nearly two years ago, she has won four fights in a row, which is usually enough to get someone a title shot if he/she didn’t completely fall out of the rankings (which she didn’t). Now look at it this way: If Tate fights and loses to another challenger, will she be able to keep her ranking since Dana White snubbed her from a title shot? What about the fighter that beat her? What happens to that fighter’s chances for a title shot? By showing favoritism towards Rousey (and money), White is screwing up the women’s bantamweight division and it’s rankings.

It isn’t any secret that the UFC and Dana White are trying to squeeze every last dollar out of their cash cow Ronda Rousey. However, by rushing this fight to the public, White is costing himself and the UFC money. He is also probably cheating you the fans out of your money by having you believe that both fighters will be 100% healthy and non-rusty on July 9th. I respect Dana White for giving fans the fights they want to see most of the time, but sometimes it isn’t about who’s fighting so much as it is about when they fight. Would I pay to see Holm and Rousey fight again? Sure, but considering Holm’s/Rousey’s situations, a fight between them just isn’t the right time. Besides, by paying for this fight, I would be cheating myself out of a chance to see both fighters when they are at their best. I wouldn’t want to do that and neither should you.