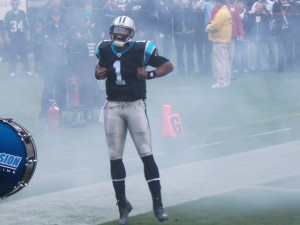 The greatest thing about the NFL is that at least one game each week will be a parody. The whole country likes to think it knows how games are going to turn out, but no one ever truly knows how a game is actually going to turn out and that is why teams play the games on Sunday. Last night, while Tom Brady (I say his name as opposed to the Patriots because he was the only one that came to play) fell to the seemingly hapless Eagles, Cam Newton threw five touchdowns and outdueled Drew Brees in the Superdome.

For the first time in 11 to 12 weeks, someone not named Tom Brady has to be taken into consideration for the trophy. Okay I lied: Cam Newton has also been considered a candidate throughout the season as well, but comparing their latest performances, Newton now has a legitimate shot to claim the trophy. Let’s see how these quarterbacks statistically stack up against one another:

Head to Head: Brady vs. Newton

Statistically speaking, Brady is clearly superior to Newton, but MVPs aren’t just won by the numbers. If that were the case, Adrian Peterson wouldn’t have beat out Peyton Manning in 2012 because Manning technically had better numbers, but how many RBs do you know routinely rush for 4000 yards, let alone 2000? …Crickets.

Other Factors to Consider

Another thing that should be taken into account is how each quarterback is used for his team. Brady is strictly a passer and is obviously one of the best to ever do it. However, Newton has to (not wants to) take over running back duties from time to time in each game. While RB Jonathan Stewart is really good at what he does, it is Cam Newton who has tremendously helped the Panthers’ rushing game to be one of the top 3 rushing attacks in the NFL (#1 just weeks ago). Newton’s athleticism keeps defenders honest and without it, Stewart might have struggled being the lone feature back and the Panthers might not have remained undefeated, especially up to this point.

If I told you that the Panthers would lose their number one target Kelvin Benjamin before the season, would you actually have expected Newton to perform well throwing the ball this season? The Panthers are getting the job done in the passing department with the best receiver on the team being a 30-year-old TE in Greg Olsen. Whenever a tight end is the best receiver on any team, one of two things can be implied: (1) The tight end is a great receiver (2) There is a lack of depth at the WR position. Olsen is a fine player, but he is not a matchup-nightmare like Rob Gronkowski, whom Brady has routinely thrown the ball to for much of the season. Also, Brady has had WR Julian Edelman, who was arguably a top-10 receiver this season before he got injured, and Darren Sproles clone Dion Lewis for much of the season as well before they got injured. Any team would take those three before butter-fingers Ted Ginn Jr., #3-option-at-best-on-any-other-team Jerricho Cotchery and a still developing Devin Funchess. It is literally Newton or bust for the Panthers each and every week. Teams know that, yet the Panthers are 12-0. Have I mentioned that the Panthers still haven’t lost a game? Now that the Patriots are losing games and key players, we’re finding out that Brady can look pretty average without some good receiver or tight end to throw to.

In the NFL, while the best offensive player has a great chance to win the MVP each season, the MVP isn’t always the best offensive player. It is a common misunderstanding among players, fans, and the people who cast their vote for the MVP. I don’t understand why people can’t just accept certain players as offensive player of the year and not MVP. Being considered the best offensive player in a league full of great offensive players is an impressive feat and acknowledgement alone. That doesn’t mean that that player is MVP. For me, Brady will always be plagued by the 2008 season when Matt Cassel (of all people) led the Patriots to an 11-5 record after Brady got injured in the very first game of that season. That season proved that Belichick’s system could make any decent/good player look better than they actually are. We’ve seen evidence of this notion throughout the years.

No one can deny the greatness of Tom Brady, a 4-time Super Bowl champion, a perennial MVP candidate, and a future first-ballot hall of famer. However, sports fans from time to time start to depreciate the greatness they witness over the course of time when they are too exposed to it. Just look at Pats fans: their team loses two games in a row for the first time in years and although they should be somewhat concerned for their team, some of them are hitting the panic button right now on a 10-2 team that nearly overcame a 21-point deficit yesterday but I digress. If Brady does not win this season’s MVP, it will be for the same reason any other great player doesn’t win the MVP every year: We like to tell ourselves that it is because those players don’t always play great, but the truth is that people get tired of seeing greatness from the same player again and again. Statistically speaking, no one is better than Brady right now, but since Cam Newton has comparable numbers and has not previously looked like a top-5 quarterback (and also because his team is undefeated), he is more likely to get the nod for MVP.

If the Panthers remain undefeated, Newton is surely going to get the award. If the Panthers lose one or two more games, he still may get the nod. If Tom Brady plays out of his mind without his key weapons for the rest of the season and clearly (not slightly) outperforms Newton, he will get the MVP. That is the only way.