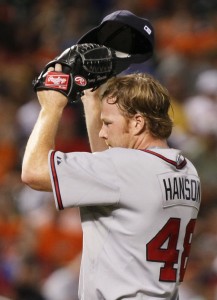 Former Atlanta Braves pitcher Tommy Hanson died Monday night at the age of 29. He was surrounded by former teammates at the time of his passing.

Hanson suffered “catastrophic organ failure”, according to WSB-TV in Atlanta, and had been hospitalized at Piedmont Hospital since early Sunday morning after claiming to have had breathing problems.

“We are incredibly saddened to learn of Tommy’s tragic passing,” said Braves president John Schuerholz in a statement released by the organization. “He was a favorite in the clubhouse and with our staff and he will truly be missed by everyone in Braves Country.

“Our thoughts and prayers are with his wife, family, former teammates and friends.”

Hanson was a former 22 round pick by the Braves back in 2005. After going through the trials of the minor leagues for a few years, the 6’ 6, 220 pound right-handed Hanson was considered a top prospect for the club going into the 2009 season (his rookie year). That season, he finished the season 11-4 with an ERA of 2.89, 116 strikeouts, and finished third in voting for National League Rookie of the Year award behind J.A. Happ and Chris Coghlan.

Injuries and personal tragedy would eventually slow down Hanson, who made his last MLB appearance for the Los Angeles Angels in 2013. Afterwards, he bounced around the league signing contracts with teams such as the Texas Rangers, Chicago White Sox, and the San Francisco Giants, but never started another game.

The Atlanta Braves, the city of Atlanta, and the MLB will remember him for his contributions and his warm personality.