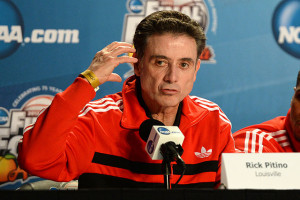 Parties at just about any university in the country are most likely going to involve alcoholic beverages and sex. Shocking, right? But what happens when those parties involve escorts and strippers and are organized by an assistant coach under college basketball Hall of Fame head coach Rick Pitino? The only one who can answer that question is Andre McGee.

According to five former Louisville recruits, parties held at the Billy Minardi Hall campus dorm at Louisville between 2010 and 2014 featured strippers (many who performed naked) paid by McGee, a former player and former assistant coach for the university.

As one recruit described it: “I knew they weren’t college girls. It was crazy. It was like I was in a strip club.”

These allegations come just weeks after a book entitled “Breaking Cardinal Rules: Basketball and the Escort Queen,” was published by 42-year-old Katina Powell, a self-proclaimed former escort. In the book, Powell details the stripping and sex parties that occurred at the campus dorm. Powell also stated that McGee had paid her up to $10,000 for bringing in the dancers at these parties.

In an interview with ESPN’s Outside the Lines, Powell had also stated that McGee paid her for “side deals,” which meant sex with recruits, guardians who visited the campus and players on the team at the time.

In response to the allegations, Pitino has stated that McGee is the only one who knows about these parties and should come clean.

McGee, who is currently an assistant coach at the University of Missouri-Kansas City, has been placed on administrative leave with pay while the school reviews the case. NCAA and Louisville officials are also investigating the matter.

Should Pitino’s Job be in Jeopardy?

As it has been proven in many cases, ignorance of something wrong occurring under someone’s leadership is not enough to escape punishment. A prime example of a person in this type of situation is Syracuse basketball head coach Jim Boeheim in the Syracuse scandal. Although his situation is much less egregious than Pitino’s, Boeheim was still punished for not overseeing the things that happened under his leadership (but not with his own two eyes).

Pitino has claimed to have had no knowledge of the allegations (as he should), but that doesn’t necessarily mean he or the university will escape punishment. No one knows if he is telling the truth at this point, but just like Boeheim, something bad occurred under his leadership. At worst, Pitino probably should only be suspended for a great deal of the upcoming college basketball season unless he actually had a role in the sex parties, no matter how small his role was. If he is fired, Boeheim and any other head coach who feigns ignorance when a rule is broken should be fired as well. Who knows, maybe both of them would be fired if they didn’t have their names or reputations.