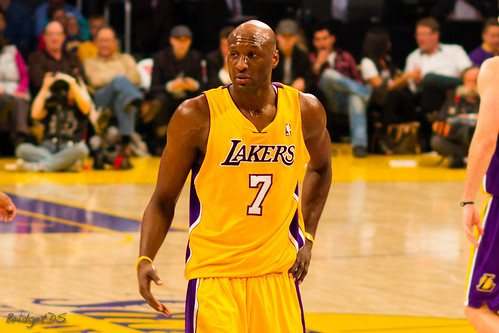 Former NBA Sixth Man of the Year and two-time NBA champion Lamar Odom has been placed on life support after being found unconscious and face-down in his room at a brothel in Nevada on Tuesday.

Odom was “throwing up all kinds of stuff” said Dennis Hof, owner of the Love Ranch brothel, in an interview with The Associated Press. Odom apparently had “spent time socializing with some of my girls,” but wasn’t using any illegal drugs, Hof continued.

Odom, 35, admitted to brothel employees on Saturday that he had taken cocaine before he arrived. He also claimed to have taken up to 10 tabs of Viagra over the past few days said Nye County Sherriff Sharon Wehrly in a news conference. The 6’ 10” Odom had to be driven to a Las Vegas hospital instead of being airlifted to one because of his height.

Many people including Reverend Jesse Jackson, former teammates Derek Fisher and Kobe Bryant, and his ex-wife Khloé Kardashian paid a visit to him at the hospital.

Charges could potentially be filed against Odom or the brothel if any evidence of wrongdoing is uncovered. The brothel could also lose its license.

A Long History of Tragedy and Unfulfilled Potential

Odom is no stranger to tragedy as he has suffered it through much of is life. His father was a heroin addict and his mother passed away from colon cancer. He was raised by his grandmother in Queens, New York.

Odom was a highly touted prospect out of high school. He decided to play for UNLV where he was quite successful. However, after a report questioned his high score of 22 out of 36 on the ACT and an NCAA inquiry discovered that he was receiving payment from a booster, Odom transferred to the University of Rhode Island while UNLV was put on four years of probation.

Odom, a left-handed, stretch forward that could play any position on the court, was supposed to be the next big thing. Although he had the skills of a number one overall pick, many teams saw him as a risk because of his personal life. He was eventually drafted fourth overall to the Los Angeles Clippers. Drug issues plagued him in his time with the Clippers.

In 2006, Jayden, Odom’s six-month-old son, died from sudden infant death syndrome. In 2011, after being traded from the Los Angeles Lakers, Odom basically stopped caring to play basketball in just his early thirties. Couple that with his highly profiled divorce with Khloe Kardashian and Odom is way under rock bottom at this point.

Lamar Odom, as lovable and flawed as he was successful, is another case of someone who oozed with potential that just happened to be going down the wrong path at the same time. Going from NBA champion to a person who was found near-death all alone in a brothel room is about as far a fall from grace as I have ever witnessed in my young life. With all that said, I truly hope Odom pulls through and I hope someone tells him that life gets better if he wants it to.