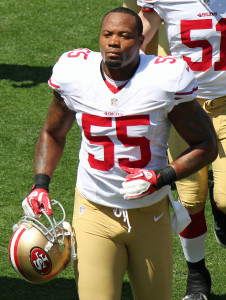 photo By Jeffrey Beall (Own work)

Whether it has been by retirement, free agency, or off-the-field shenanigans, the San Francisco 49ers has lost many key members including workhorse running back Frank Gore, who is now a member of the Indianapolis Colts, and star linebackers Patrick Willis, who retired in his prime after being sidelined for much of the 2014 NFL season, and Aldon Smith, who was already past the third strike with the team when he committed a hit-and-run, DUI, and vandalism earlier this month. The latest 49er (technically one of the earlier players) to involve himself in the shenanigans is linebacker Ahmad Brooks.

On Wednesday, Santa Clara County prosecutors charged Brooks with misdemeanor sexual battery stemming from an incident at a pool party at then-teammate Ray McDonald’s home in December. McDonald was indicted on a rape charge by a grand jury. If convicted, Brooks could face up to six months in jail while McDonald could face up to eight years in prison. Both would also have to register as sex offenders.

Expectations for the 49ers This Season

When the 49ers look back on this past offseason, there is no doubt they will think that this had to be their worst offseason ever. It is probably THE worst offseason ever in the history of the NFL. There is a saying in the NFL called “next man up,” which means that whoever is next in line to replace a player for any reason has to be ready to go out onto the field and perform at a high level. It is easy to say this phrase when it is one or two players, but when the number of players to replace is nearly 20, the phrase is nonexistent. At this point, I’m not even sure they will have a 53-man roster.

The 49ers will most likely be a completely different team by the time they play their first regular season game at home against the Minnesota Vikings. While every other team in their division seems to have restocked and reloaded, the 49ers are the only ones that appear to be in rebuilding mode. Unless the replacement players actually perform at the same level as their predecessors or at a higher one, the 49ers could be more disappointing than last year’s team and could miss the playoffs for a second consecutive season. What seemed like a dream opportunity to further his career in the NFL must now be a living nightmare for head coach Jim Tomsula. His job is easily one of hardest jobs in football at this point.