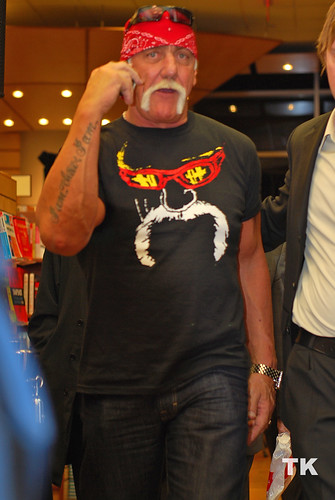 SMH — Twitter is going crazy over the news that Hulk Hogan has been fired by WWE. His contract ahs been terminated and every image, article, everything has been erased from its website. This is after audio from a radio interview surfaced in which the wrestler repeatedly used racist words. A statement said: ‘WWE terminated its contract with Terry Bollea (aka Hulk Hogan). WWE is committed to embracing and celebrating individuals from all backgrounds as demonstrated by the diversity of our employees, performers and fans worldwide.’ Hogan tweeted about the incident late Thursday night, saying, “In the storm I release control,God and his Universe will sail me where he wants me to be,one love.” This comes at a particularly bad time for Hogan, who is currently engaged in a $100 million lawsuit against Gawker over the release of a sex tape featuring the wrestler. Hogan is one of the most popular wrestlers in history, with “Hulkamania” ruling over WWE programming during the 1980’s and early 1990’s.  He won the WWE World Heavyweight Championship six times during his career, most recently in 2002. He was inducted into the WWE Hall of Fame 2005.