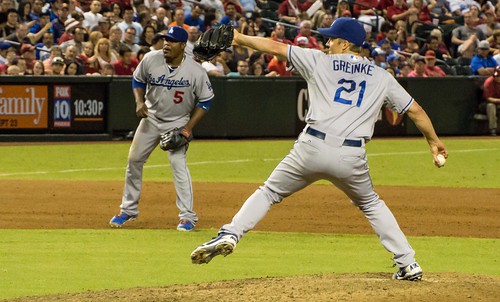 by  Not That Bob James

Greinke’s streak was snapped in the third inning when the opposing pitcher, Jacob deGrom, grounded into a fielder’s choice.

deGrom grounded the ball to Adrian Gonzalez, who in turn threw the ball to home plate. Unfortunately, base runner Kirk Nieuwenhuis beat out his throw and catcher Yasmani Grandal’s swipe tag.

Greinke would give up another run before being pulled so now his streak is now somewhere between 0 and 1 IP. Still, he is to be commended for this historic run. The 45 2/3 IP scoreless streak was the 4th-longest streak in the Expansion Era (1961-present; also, just about anytime ‘Era’ is mentioned in a stat, someone did something very impressive, good or bad.) and the longest streak since Hershiser set the record nearly three decades ago.

Many excuses were made for what might have caused Greinke to not play the same way he has been playing for nearly two months. Those excuses include Greinke having to deal with the birth of his child and Dodgers’ outfielder Joc Pederson bobbling a catch in center field, which allowed Nieuwenhuis to run to third base with 0 outs. At the end of the day, maybe it can be blamed on the nature of the game. No one is perfect so to assume that Greinke was going to just walk through yet another major league team is ridiculous.

Currently on the Dodgers’ roster, pitching ace Clayton Kershaw has the longest streak with 29 IP. His next start is against the struggling Oakland Athletics. Kershaw is obviously just as good if not better than Greinke so this topic may be relevant again in a few weeks.