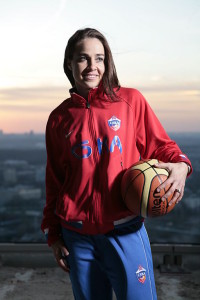 Becky Hammon, is the Spurs assistant Coach. She decided to add more to her plate by coaching the Spurs summer league team to a championship. She did such an outstanding job that many people associated with the NBA believe she will be the first woman head coach.

Bobby Marks, a former assistant GM for the Nets, tweeted that if he was running a team and had a head coach opening the first call it would be Hammon.

I know this is a bold statement. If I was running a team and had a head coaching opening. The first call would be to Becky Hammon.
— Bobby Marks (@BobbyMarks42) July 21, 2015

Times are changing. Long gone are the days of men bringing  home the bacon and women politely cooking it. Women are breaking into male-dominated industries and becoming a force to be reckoned with. Unfortunately, I believe Becky will not make history tomorrow. I predict that she will be a NBA  head coach in about 5-10 year time span. I also predict that she will  be offered another job first. WNBA most likely want her back and a few college teams will be pleased with someone of her caliber.