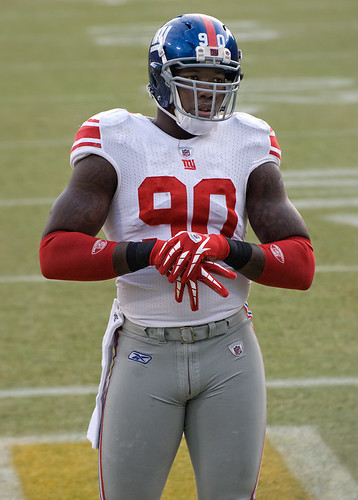 You know those ‘don’t try this at home’ warnings you see whenever someone performs a dangerous stunt on TV? People who put those warnings their do it for your health and safety not theirs. Apparently, either Jason Pierre-Paul doesn’t watch TV or he was debuting in a new season of Jackass.

The New York Giants star defensive end injured his hands in a fireworks incident while celebrating Independence Day in South Florida. According to ESPN’s Adam Schefter & Dan Graziano, Pierre-Paul suffered severe burns to his hands and fingers, one of which is being tested for nerve damage. The extent of his injuries has yet to be determined, but it does not appear to be career threatening.

Similar to the Dez Bryant situation, Pierre-Paul has yet to sign his $14.8 million franchise tender. Pierre-Paul has until July 15 to do so. Signing the tender after that date would guarantee him a contract that only plays out through this upcoming season. If Pierre-Paul has his franchise tag removed, he would become an unrestricted free agent.

What This Means for the G-Men

For the Giants and every other sports team that invests millions of dollars into athletes, this is somewhat of a nightmare scenario. Alongside a team’s expectation for players to perform well on the field, teams also expect them to stay injury-free off the field. JPP couldn’t do the latter and has put the team in a worse spot than before when he was healthy.

The Giants obviously wanted JPP otherwise they would’ve never placed the franchise tag on him to begin with. Whatever the Giants decide to do, they will be taking a risk.

If they keep JPP (assuming he signs the tender), he could miss much of the season. Even if he comes back on time, he may not be that effective considering the fact that hands are key to a defensive lineman’s success and JPP’s hands will hurt like hell. This move could end up being a waste of money.

If they remove the franchise tag and let JPP test free agency, they would save some money but could end up losing a key piece to their already struggling defensive line. The Giants could end up regretting the decision because the defense is still questionable at best even with JPP.

Looking back at the Giants’ most recent Super Bowl runs (2007, 2011), one of the keys to their success was their ability to get to the opposing team’s quarterback. If they plan on getting back to another Super Bowl, they will need to build that line back up.

Eli Manning may have found a new weapon in the ultra-talented Odell Beckham Jr., but he cannot be trusted to carry the team. He has led the league in interceptions in three separate seasons and isn’t known for winning many offensive shootouts against other high-powered offenses.

What This Means for Pierre-Paul

For JPP, there are three clear options at this point:

Whatever the two sides do, they should do it fast because that deadline is very close.