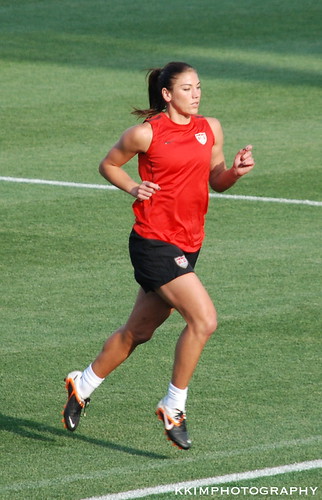 When I think of soccer the first person comes to mind is David Beckham. But there is a US Soccer player and Olympic Gold medalist named Hope Solo. With the Women World Cup underway 33 year old Solo is getting heavy media coverage and it’s not because of her performance on the soccer field. Solo’s husband former NFL player Jerramy Stevens defends her by commenting, “she’s in the right.”

Stevens was speaking about a prior run in with the law last June when Solo was charged with two counts of domestic violence assault from an altercation that involved her sister and her 17 year old nephew.

With allegations looming, Solo has not said much to the media since the World Cup has began. With the opportunity to earn more multi- million dollar endorsements the debatable topic is that Solo’s brand is tarnished and her earnings are limited. Compared to other female athletes who have not been involved with domestic violence allegation such as, Danica Patrick and Serena Williams who consistently gain and retain lucrative endorsements based on the visibility of their sport.

Thought of the Day:

Hope Solo is an excellent soccer player and is regarded as one of the best goalkeeper in the US. She has the potential to make more high earning endorsement but she must remain focus on the World Cup. Silence is not always a bad thing.