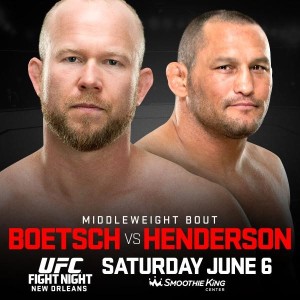 What a wild night it was at UFC Fight Night 68 in New Orleans, LA! Tons of finishes is all UFC fans ever ask for and that is exactly what we got at this event. With 10 finishes on record, 6 of which came from the whole main card, it seemed like just about every fighter took the old saying ‘don’t let it go to the judges’ very serious. Before we get to the main event between former Pride and Strikeforce champion Dan “Hendo” Henderson and UFC veteran Tim Boetsch, here is a summary of the preliminary card and main card fights leading up to it:

Leonardo Morales vs. Jose Quinonez: Quinonez defeats Morales via submission (rear naked choke) at 2:34 in the first round.

Dustin Poirier vs. Yancy Medeiros (lightweight bout): The hometown fighter Poirier defeats Medeiros via TKO at 2:38 in the first round.

Round 1: Boetsch comes out throwing a combination of punches and Henderson counters him with a hard right hand. Boetsch is staggered and Henderson clinches him and lands a left knee. Henderson pushes Boetsch against the cage, lands a right uppercut that drops him, and just keeps punching until the referee pulls him off. The fight is all over.