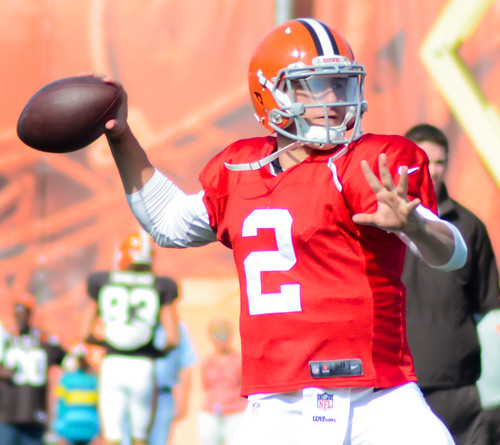 Cleveland Browns quarterback Johnny Manziel AKA Johnny Football is back in the news for yet another incident involving a fan. This time it was at the AT&T Byron Nelson golf tournament in Irving, Texas.

On Saturday evening, a heckling fan at the golf event attempted for two hours straight to get an autograph from Manziel – that is some serious dedication. When the fan realized he wasn’t going to get that autograph, he began to trash-talk Manziel who in turn threw a water bottle at him. Fortunately for Manziel, this was the one pass that he was probably relieved that he didn’t complete, as the bottle missed the fan. At that point, one of Manziel’s friends stepped in and shoved the fan.

The 18-year-old fan that was involved decided not to press charges against Manziel and his friend.

Johnny Football is no stranger to publicity and controversy. Remember his days at Texas A&M University where he allegedly received money for signing autographs? No evidence was found to support that allegation, but he was still suspended for a whole…half of a game probably because he tried to rub his nose in it and the NCAA didn’t want to appear incompetent.

More recently, Manziel entered rehab in February months after his brief, lackluster performance in his rookie year. Also, With the signings of quarterbacks Josh McCown and Thaddeus Lewis in the offseason, Manziel will most likely start out the season as the 3rd-string quarterback since those quarterbacks have way more experience in their pinky fingers than he has overall.

Now Manziel’s career isn’t over by a long shot. He could theoretically outperform McCown and Lewis in training camp and/or the preseason and get the nod to start. But if he doesn’t, would he really be willing to wait for his chance to start in Cleveland, which could take months if not years? If not, at least the need for quarterbacks in the NFL will never end as long as there aren’t clones being mass-produced from younger versions of Tom Brady, Peyton Manning, Aaron Rodgers, and Drew Brees.

On the other hand, like I said earlier, some people are destined to prevent their own greatness from ever being displayed. I get that Johnny is still practically a child and wants to go out and have his fun. He should still have his fun, but only after he has proven himself in the NFL. As many NFL players will tell you, you don’t get awarded for just making it to the pro level. This is where the real journey for a football player begins.

If Johnny Football wants it bad enough, he is going have to start acting like it. He has a chance to do something for a living that most people wish they could do but can’t because of a lack of talent, skill, or in Johnny’s case – discipline. He should take notes from Seattle Seahawks quarterback Russell Wilson, a 3rd round draft pick with little to no expectations who beat out his competition for the starting position and has just recently played in his second Super Bowl at the age of 26. He’s young as well and probably will never get caught up in the same foolishness that Manziel just seems to thrive in.