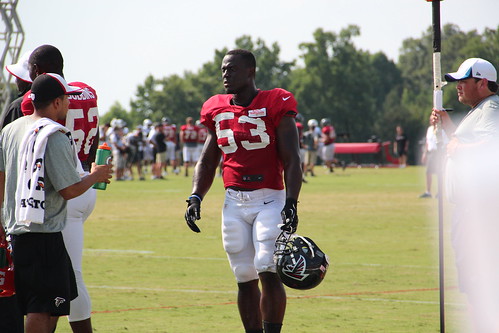 Even after the whole Michael Vick incident that lingered on the minds and palates of adoring fans. The Falcons franchise was restructured. The team and fans were able to move pass the past. Now the Falcons are reliving a familiar story of one of their beloved players being accused of mistreating a dog.

According to the AJC, 23 year old Prince Shembo has been charged with aggravated cruelty to animals.

Shembo’s former girlfriend Denicia Williams called the police on April 19 to report that her former boyfriend had killed her Yorkie, named Dior. She allegedly left Dior with Shembo and when she returned, Dior was unresponsive. Dior died shortly after.

The Falcons released a statement: “We are aware of the charges that have been filed against Prince Shembo. We are extremely disappointed that one of our players is involved in something like this. Accordingly, we have decided to waive Prince Shembo.”