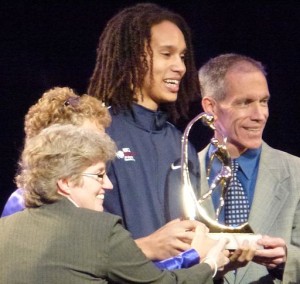 Photo CC By Sphilbrick (Own work)

TMZ originally broke the story of Brittany Griner and wife Glory Johnson being slapped with a 7 game suspensions after they were arrested for attacking each other at their AZ home on April 22nd.

Johnson told The Associated Press. “We fought, we hashed it out, we talked it out, we were like, `Did we really just do that?'” Johnson acknowledges the significance of domestic violence. However, she has decided to appeal her suspension.

Brittney Griner has maintained she will not appeal the suspension. However her fellow teammates would like her to change her mind and appeal her seven-game suspension.

The question remains: Is the 7-game suspension too harsh?
My answer is No.

Domestic violence is the same for a same sex couple or opposite sex couple. I understand and totally get, “in the heat of passion”but if a argument escalates to a boiling point where blows are being exchanged. Domestic Violence is never acceptable.
The current state of domestic violence in both the NBA & NFL are as followed :
NBA Hornets Jeffery Taylor was suspended 24 games for domestic violence.
NFL Ray Rice was released by the Baltimore Ravens, suspended indefinitely and eventually re-instated to the NFL but he has not returned to the football field.

Thought of the day:

If Brittany and Glory were not two females and were a male and female couple what do you think their punishment would be?