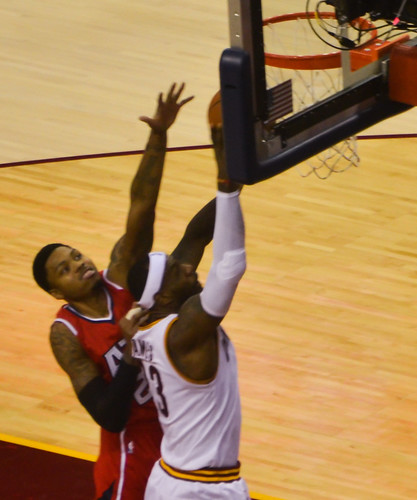 If you watched the game you can’t ignore what you saw.  A 30-point loss in an elimination game 4 makes a statement:  The Hawks, in their current configuration, can’t ride the Tao of Pop to a championship.

I tweeted before the game last night that the Hawks needed to shoot 50% from the field and erase the rebound margin in order to win.  They did neither and got dump-trucked.  Shooting 42%, and 15% from three, shows a team that wasn’t able to step up in the moment.  They shot a lower field goal percentage and almost 10% lower 3-pt percentage in the playoffs. But that didn’t stop them from launching 3’s like the Dubs.  I understand Korver was out for two games, but even when he was in he struggled to get his shot.  Al Horford took SIX shots, SIX!  Schroder, Bazemore and Mack took more shots than the All Star?  Not a winning strategy.

Atlanta also got bum-rushed around the rim.  They were out-rebounded by almost 20 last night and grabbed only 7 offensive rebounds.  Horford only managed two…..that’s right….2 rebounds.  That’s well below his playoff average of almost nine.  Tristan Thompson and Timofey Mozgov basically did what they wanted inside.  They combined for 30 points, 18 rebounds and 4 blocks and patrolled the paint like they owned it.

I WILL give coach Bud credit for emptying the bench in these last two games and giving of his reserves a shot.  He started Bazemore out of necessity but allowed he seemed to take advantage of the opportunity and was all over the floor, challenging every position with reckless abandon and grabbing rebounds.  Shelvin Mack was solid at times and completely manic at others.  He seems so committed to attacking that he winds up in awkward spots on the court and often has no one to bail him out.   Mike Scott is a skilled rebounding forward.  Millsap was the only Hawk who outperformed Scott on the boards in this series.  I’m not sure why Antic and Schroder didn’t see the court as much, but neither had an impact when they did get in.

All the stats aside, the Hawks just didn’t belong in the discussion for a championship.  They scraped by their first two series thanks to age and injury, respectively.  And when they ran into a legit contender they got weighed and measured and found lacking.  I’ll be the first to get on board with “team” play and the passing/motion offense Atlanta used this season.  Nothing is more fun to watch than a defense trying to catch up when the ball is swinging side to side.  The Hawks just need to tweak their rotations and invest in more bench players.  They ran into the biggest enemy of this type of roster:  injuries.  But this team has the talent if used properly and HONESTLY.  The Cavs shined a light on the level of talent and position deficiencies at Philips Arena.

Now that I’ve established what’s wrong with the Hawks, I promise to only bring solutions moving forward.  Stay tuned for how Atlanta gets better……